It was a Featherweight Kind of Day

Even though I already had three perfectly good sewing machines, each in excellent condition and kept in good working order, I had been thinking that maybe I "needed" a Singer Featherweight.  I knew that many quilters sew on nothing else.  I had been told that absolutely nothing sews a more perfect stitch than a Featherweight. I realized that there is an entire sub-culture of Featherweight enthusiasts within the quilting world.  I had even seen that knowing look pass between quilters at retreats as they glanced with approval at one another's beautiful little pieces of sewing history.  I would never become one of those quilters.

Then again.......... I thought I might just keep an eye out for one.  After all, I have friends whose husbands have found them at garage sales for $50.  I've even heard of gals who have been so lucky as to find one along the side of the road piled up in someone's cast offs.  I could handle a deal like that!   So, I put the word out to my quilty friends, and in no time at all I became the proud owner of my very own, brand new, really old Singer 221 Featherweight.  I took it out of its cute little carrying case and looked at it after I got it home in September of 2007.  Then, because I like to be shown how to do things when I am learning something new (and because I am a real scaredy-cat!) there it sat.  Ignored.  Neglected.  Forgotten. 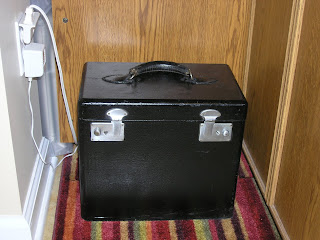 My friend Darlene came over to my house yesterday and brought one of her many Featherweights with her.  She had a very informative book with her which helped me learn how to thread my machine, fill the bobbin, and clean and oil it, and I can tell you that those basics have not changed much in the last 77 years since Singer introduced this machine! 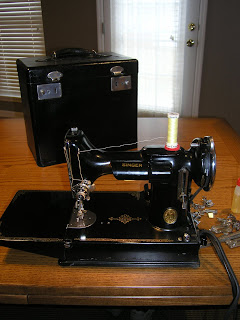 I also learned a lot about my particular machine. Based on the serial number mine was made between 1935 and 1938. It has a very beautiful Egyptian scrollwork faceplate....... 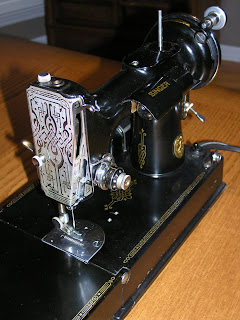 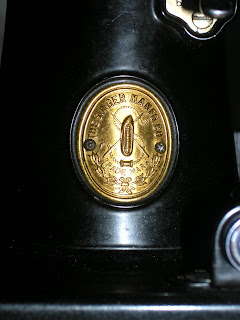 
It really does sew a beautiful stitch.  I wanted to do some serious sewing on it, but I felt like I should make a 1930's era quilt block.  I felt like I needed to only sew on 1930's reproduction fabrics with it.  I felt...........Well, I felt hungry!  So we went out for lunch and had a really good visit. 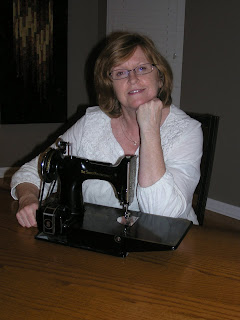 I guess the main thing is that I finally bonded with my Featherweight, and now I am looking forward to sewing on it, even if I have to use those batiks I love so much!
Posted by Sandy Panagos at 9:15 AM 11 comments: