When my sister told me she was involved in organizing a fundraiser to help with her BFF's medical bills I (naturally!) offered to make a quilt to be raffled.  I wanted to make something that would appeal to a large audience so I decided to make a gender neutral baby quilt. Then, I got to thinking about the fact that this fundraiser is being held in Cardinals country.  St. Louis Baseball Cardinals to be exact.   A lot more money could be raised from a Cardinals quilt, right? 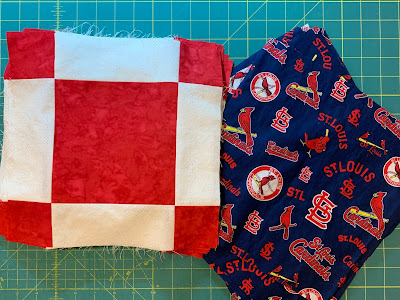 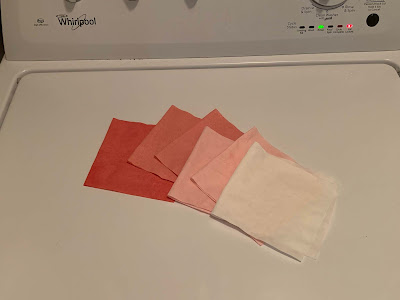 Gotta love those color catchers, but it wasn't until the last wash cycle when I added Synthropal that I saw the results I wanted.  Next time I work with red fabric I think I'll use it the first time.  :-(

Once it was basted I wasn't sure what thread to use.   My quilting is decent, but I don't really want it to show up that much! 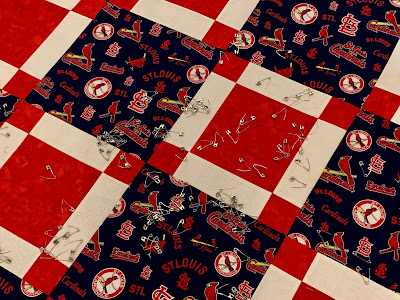 It's hard to tell when you look at it on the spool, but this variegated thread is blue, red, and yellow so I thought it would work well.  The quilting shows more than I wanted it to.  I just had to work slowly and do the best I could.  Well.  I always do the best I can, but, you know.... 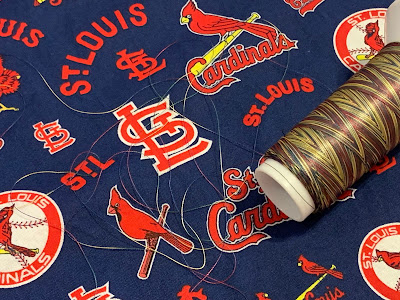 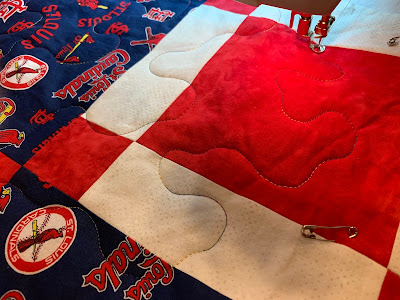 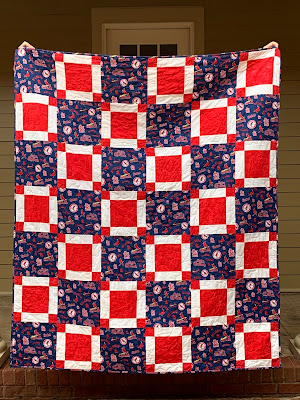 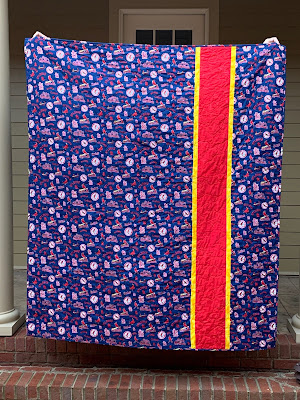 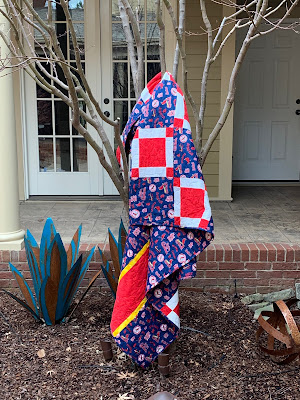 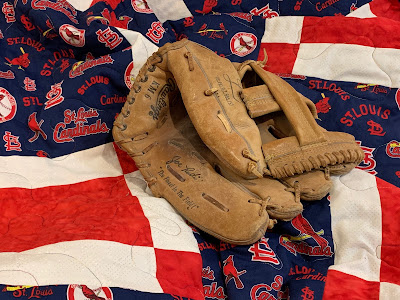 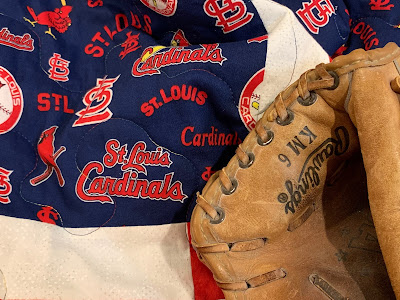 So, off it goes in the mail this week to my sister.  Fingers crossed!

Making a Dent - Another Finish

One of my goals this year has been to use up some of the 2.5" batik strips I cut last year.  In May I completed "Hypnotic", a 72" x 72" beauty (if I do say so myself!) for Stephen and Kailey's wedding.  I blogged about it here.  Then in November I finished piecing a gorgeous 98" x 98" top (if I do say so again!) for my sister, Debbie.  I blogged about Debbie's quilt here.  This top is currently with a friend waiting to be quilted so it won't make it off the UFO list this year.

As the year is winding down I have a third batik quilt finish to share. 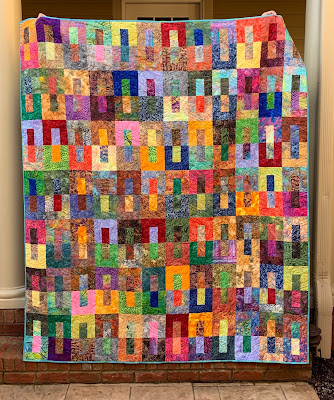 "Gemini" by Janine Burke for Blue Underground Studios has been on my "to do" list for a while, and I had fun working on it. 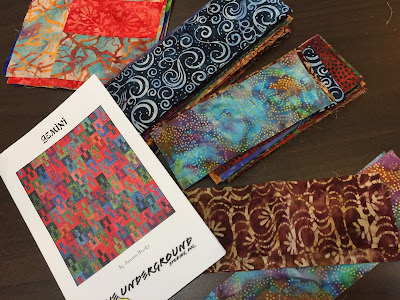 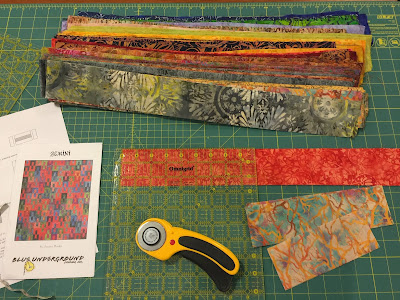 The actual construction of the blocks didn't take long at all.  I made two-color rectangular blocks, and cut them in half ..... 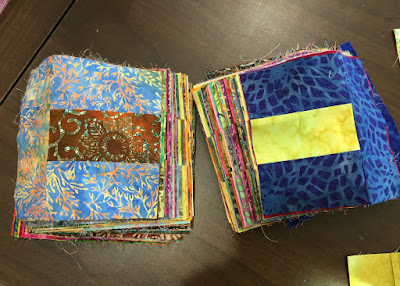 .....then mixed them up and sewed them back together. 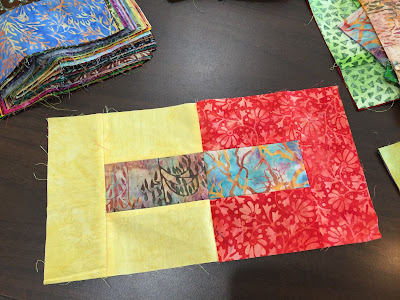 You can't really make a mistake putting blocks like these into rows. 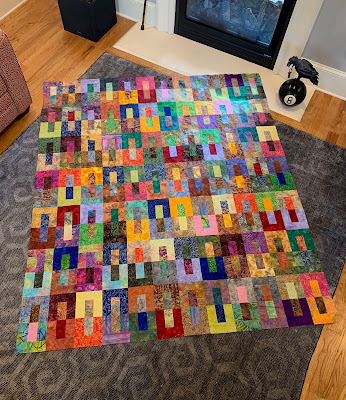 Shirley, did another great job quilting this one for me. 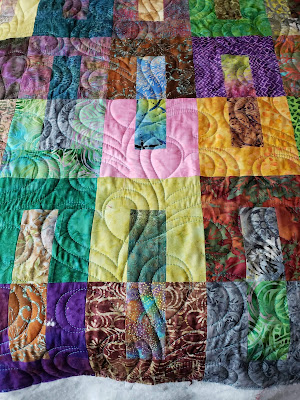 Don't you love the Grunge fabric I found for the back? 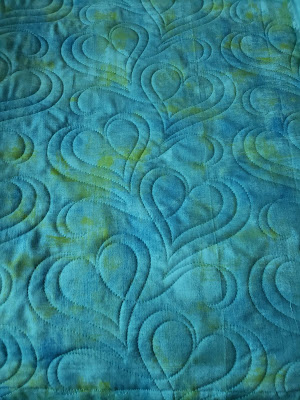 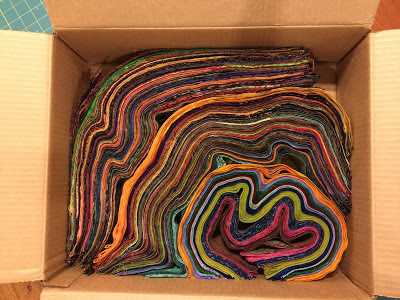 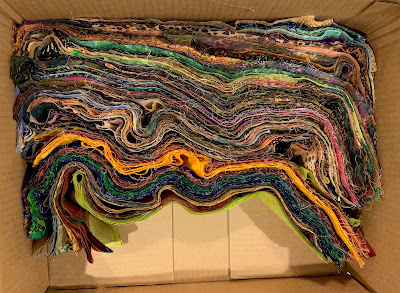 "Gemini" will be gifted soon, and I'm excited that I'll be able to do that in person in just a couple of weeks.  Now to decide what the next batik quilt will be.