Back in May I told you in this post about making fabric out of scraps and using it in blocks for a block swap with the the 15 Minutes Play group to which I belong.  I showed you the January through May blocks, and thought you would like to see the the rest of the blocks I made for the year-long swap.  In June I made these leaf blocks for Glenda. 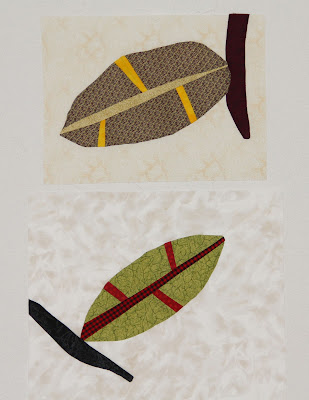 In August Barbara sent each of us some pink fabric and asked for hearts. 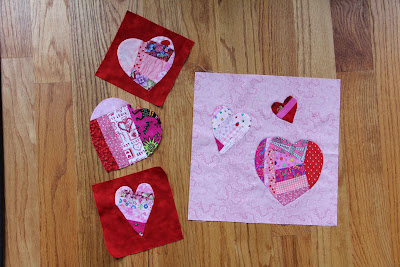 San-Dee asked us to make fabric and then cut it into simple shapes so she could appliqué them onto wheelchair lap quilts for dementia patients in September. 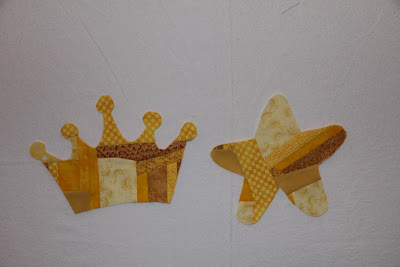 Cindy posted directions for these cute blocks that she wanted us to make for her in October. 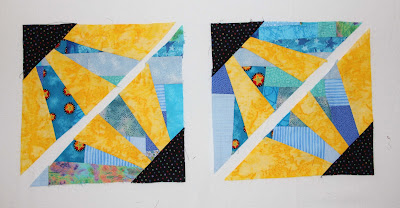 Then in November Melinda asked us to make any kind of star blocks using "made" fabric for the stars and black and white background fabrics. 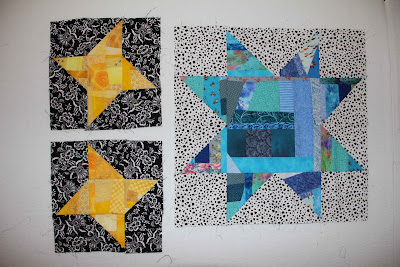 I think the December star blocks Alexis asked for were my favorite of the entire swap.  Bright "made" fabrics for the center of the star with yellow points and a red background.  She said to "wonk it up" and I tried. 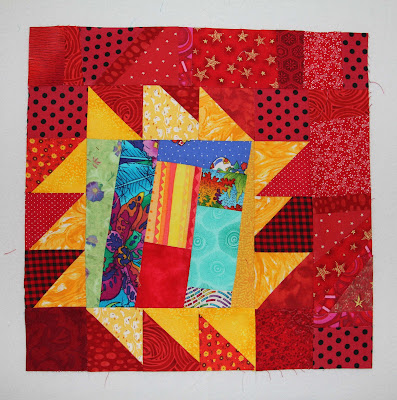 You will notice that I skipped July.  That was my month to receive blocks.  I'll tell you about that later.
One thing I learned is that even though I enjoyed the swap, I do not like making fabric.  For one thing it makes me feel like I have to save smaller and smaller scraps of fabric.  For another thing, whenever I make fabric my sewing room looks like this......... 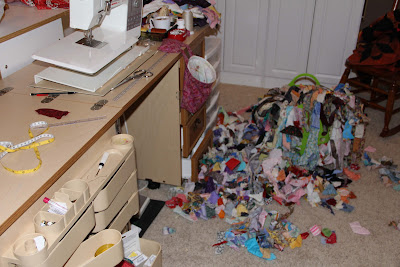 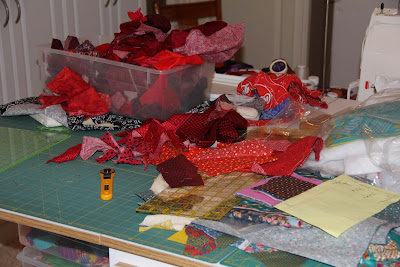 I think this coming year, I will stick to making quilts from "bought" fabric!
Posted by Sandy Panagos at 7:03 PM 1 comment:

I love it when I get to finish a UFO and end up with a lovely gift for someone special at the same time.  This quilt was started several years ago when my friend Barb was in charge of the Lotto Blocks for our quilt guild.  She came up with this simple batik 6" block, so of course I was going to make a whole quilt from it.  I made 25 blocks, stitched them together and then it sat in a drawer until two months ago when I decided it had been a UFO long enough.  (You have heard this song before, haven't you!? LOL) 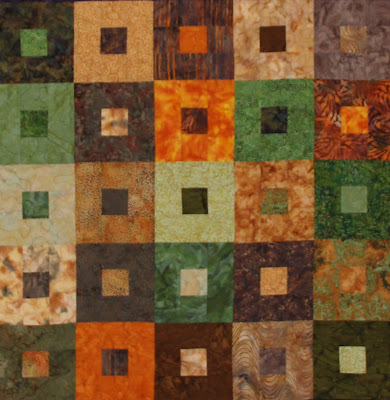 I did not want to make gazillions of the same block so I thought it would be fun to make this a sort of "One Woman Round Robin" instead.  One border at a time and it would be a real quilt!
I found a great eggplant batik at my favorite online source, Batiks Plus.  I used six different gold and purple batiks cut into 2 1/2" squares and had my first border done. 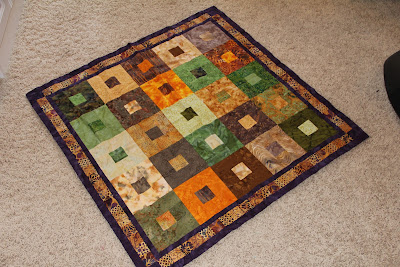 It was looking a little bland to me, so the next round was a colorful piano keys border.  No, I did not repeat a fabric.  Yes, I do have a great stash! 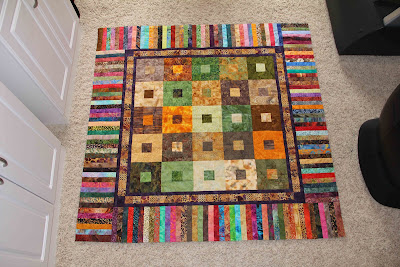 I wanted to add a plane border next with appliquéd flowers and vines.  Everybody knows you need some curves to balance all those straight lines.  Well, almost everyone.  Hubby said it needed squares instead and sketched it out for me.  Huh.  Looks great!  Whatta ya know about that!? 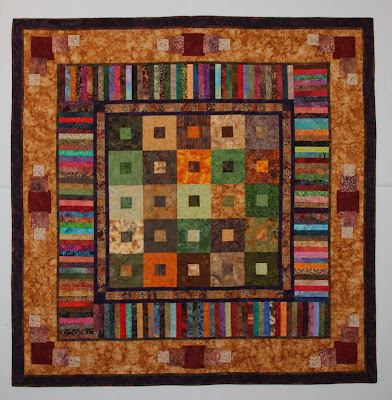 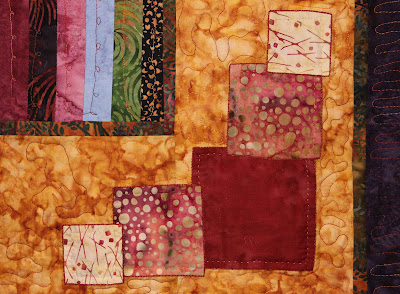 I appliquéd the squares on and then embroidered around them and finished it off with another eggplant border.   I mailed the quilt to my nephew Tim and his wife Catherine in celebration of them buying their first home.  I think it will make a great snuggle quilt for them to use for many years to come. 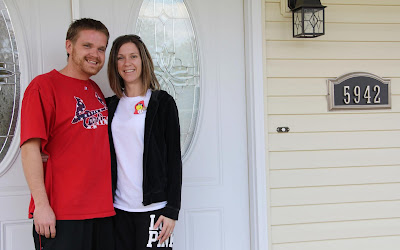 So, Congratulations to Tim and Cat.  And Happy Housewarming!!!
Posted by Sandy Panagos at 4:17 PM 6 comments: