One More UFO Checked Off!

A few weeks ago I finished my oldest UFO and checked it off the list, and I'm pretty happy about that.  Braggy, even.  (Yup, it's a word.  I just looked it up!)  In 2001 I participated in a Block Swap with a group of online friends.  I sent a fat-eighth of background fabric to each person on the list and asked them to make any size block they wanted.  I told them I looked forward to the challenge of putting together a top with different sized blocks using interesting sashings and settings.  Innovative group that they were, I received nineteen 12" blocks and three 6" blocks.  Hmmm.  Not much opportunity for creativity in laying out those blocks.  It all got stuffed into the back of a cabinet.

I got it out last month and took another look at it.  I bordered each block with a small strip of black and made the border from the leftover background fabric. 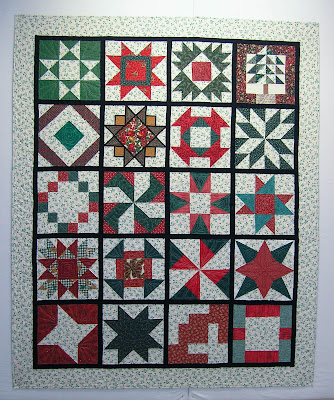 And, talk about a pieced backing! I used up a whole lot of leftover muslin scraps (almost 50, actually) to make this backing, and I incorporated the blocks I couldn't fit onto the front. I decided to have some fun quilting this one, so I experimented a little and did something different in each block. 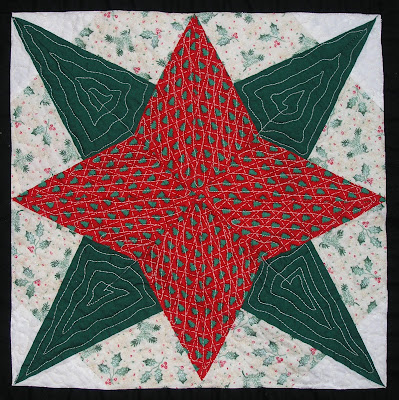 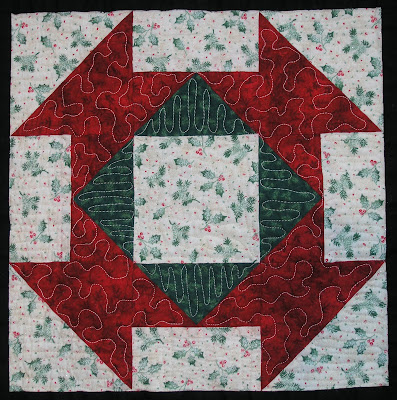 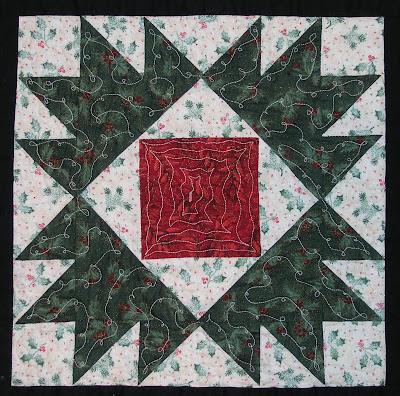 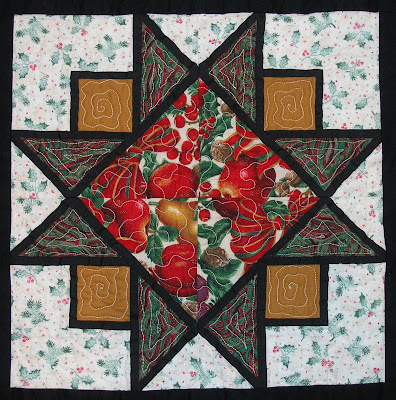 I like this quilt a lot.  I have another Christmas quilt to display during the holidays, AND I got another UFO marked off my list.  Can't complain about that! 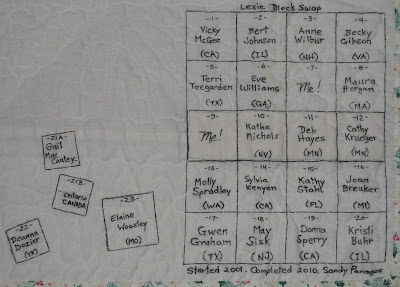 Sometimes when a niece or nephew gets married I make a simple scrap comforter tied with yarn and give it to them as part of their shower gift.  Everyone loves comforters.  They come in handy for all kinds of things and last just about forever. 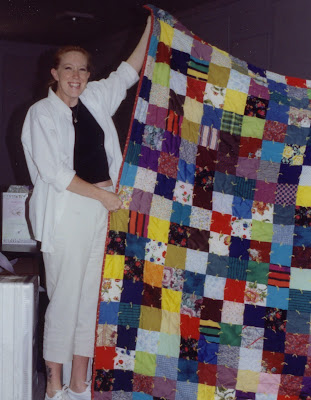 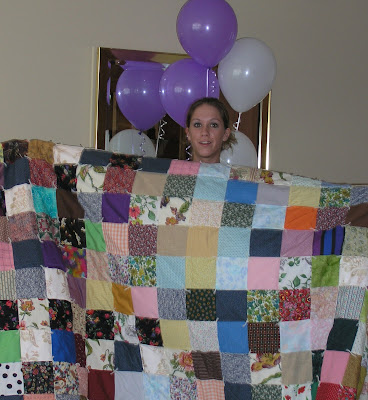 As soon as Travis laid eyes on Vanessa in 2007 while they were both in the Army he decided she was "the one" and there was no need to wait, so they were married within months.  I barely had time to say, "Congratulations" much less make any gifts.  Other projects became priorities, including quilts as their babies came along, and the comforter just never got made.
I bought Paula Hughes' pattern Over and Under because I thought I would make it "someday" out of oriental prints, but when I found out what Travis and Vanessa's favorite holiday is, I wanted to use the pattern for their quilt and all those HALLOWEEN prints I'd been saving would be perfect for it. 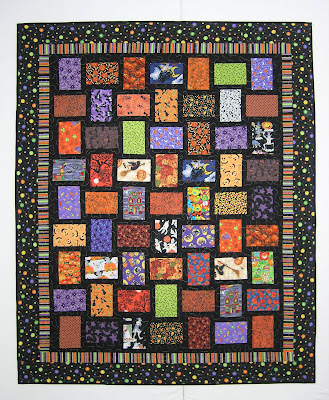 And a matching pillowcase for every one in the family! 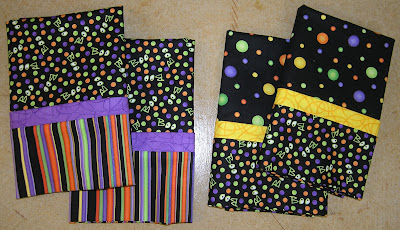 I had just the right amount of spiderweb fabric in my stash to add to the backing and make it even more fun! 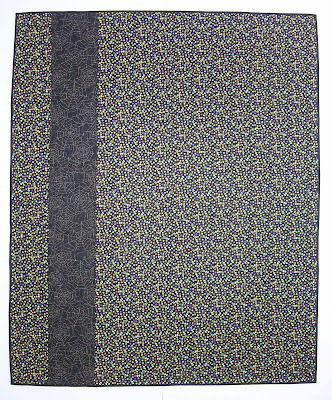 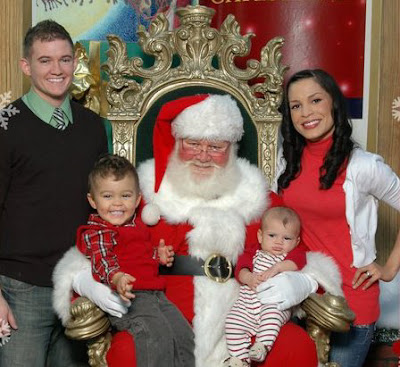 
(And Happy Halloween, too!)


By the way, just so you know, sometimes they really look like this! 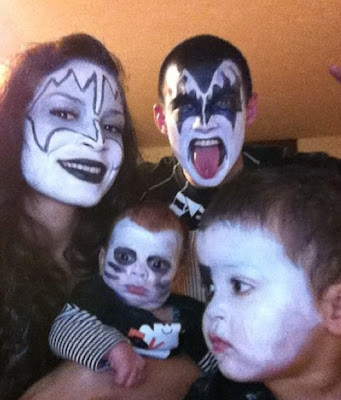 Way back in July I told you about Aaron and Leah's Bloomin' Nine Patch in this post.   Since I started hand-quilting it on July 16th I have been making some serious headway and thought I would give you an update.


I am a notorious list-maker, chart-keeper, note-taker type person.  So obviously on a project this large (the quilt is 110" x 120") I want to keep track of my progress.  It kind of becomes a game to me that way, and it keeps me motivated. (And, yes, I am extremely competitive!)


There are 1,010 blocks in this quilt.  I knew I would NOT want to regularly count them, so the first "list" keeps track of weekly progress.  I jot down a little hash mark for each block completed and then tally them up at the end of the week.  The second "list" shows how many blocks are in each row so I can just add instead of count as I complete a row.  (And, even though adding involves the dreaded math I would rather add than count!)  The third "list" shows how many blocks need to be quilted to get to certain progress points - 1/4th, 1/3rd, etc. 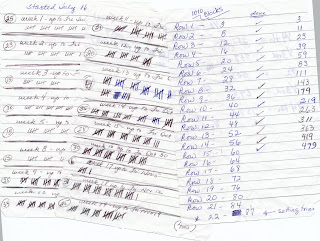 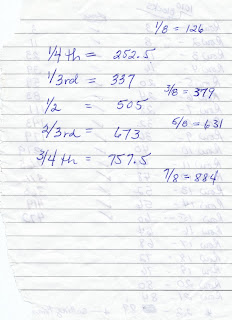 I want you to know that list-makers sometimes wear themselves out before they even start their projects!

Are you ready to see how much I have done so far?  (The "so far" at the end of the sentence indicates that there is hope -- I am NOT giving up!) 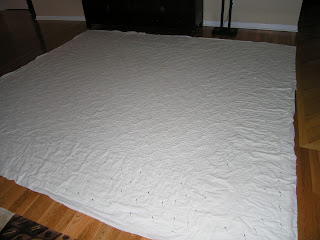 I have quilted from the center working out, and I have quilted to within 15" of the edge.  Looks like a lot, doesn't it?  Well, it's NOT.  I have quilted exactly half the blocks!  Looks are deceiving for sure.  That's the problem with list-making.  I would have thought I was almost done!!


It really is pretty, though.  I am quilting around each little square in the nine-patch blocks and using a great stencil in the solid blocks.  It's called "Quilted Ball" from The Stencil Company.    A great and inexpensive place to buy stencils, by the way.   Sometimes I just buy them so my grands can trace them and then color the designs.  They love stencils! 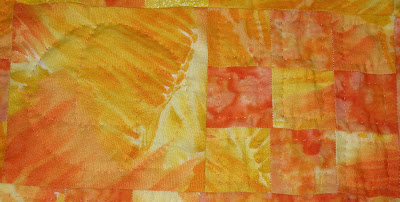 Another fun thing about the quilting is I am using different colored threads as I move towards the outside edge, starting with pale yellow in the middle, then light orange, dark orange, red, and finally black.  I don't think it will be real obvious once it's completed, but I am NOT ripping anything out! 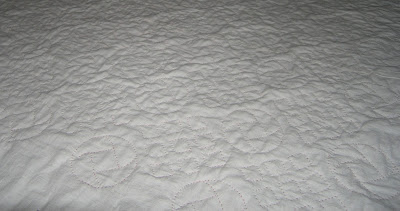 You may be able to see the thread changes in this photo. Maybe not.  Either way, no critiques of my work, please. My fingers are awful sore and I have to be able to think the pain is worth it! 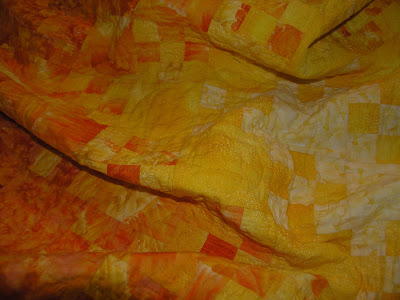