A Block by Block

Our local quilt shop, Patches and Stitches, is celebrating their 40th Anniversary. One of their celebration activities is a Block by Block sew-along.  (Oh, yeah, and a 40% discount on a different item or category every week.  But we won't talk about that.)  The owner of the shop designed a quilt using forty different block designs.  Customers received block patterns two at a time as well as directions for the quilt layout.   The first forty customers to return to the shop with a completed quilt, having used all forty blocks in it, received a $40 gift certificate from Patches and Stitches.   (Spoiler Alert --- I got one!)

This is the quilt made and displayed by Patches and Stitches, done mostly in pastels and finishing at 87" by 96". So. Not. Me. 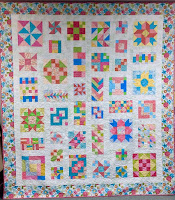 I used scrappy batiks from my stash for all the blocks ..... 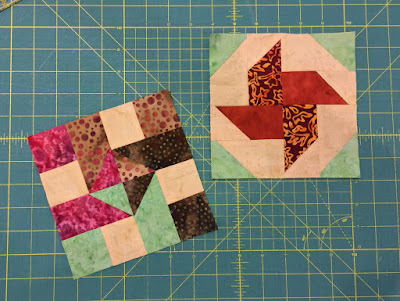 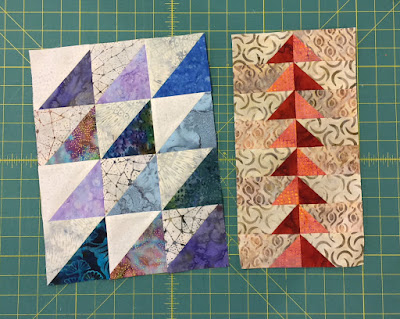 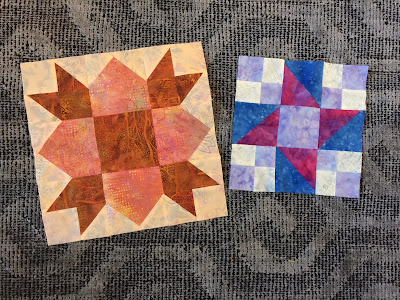 ..... and a really pretty taupe for the sashing. 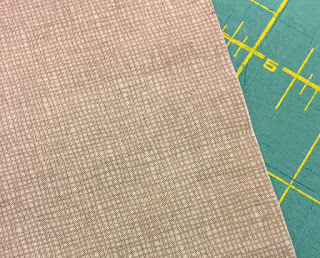 My friend, Denise, and I had a weekly date to get our patterns and have lunch out.  We kept each other on track, we admired each other's blocks, and we had a lot of fun.  Twenty weeks went by fast, then it was time to take all those blocks I'd made and start to play.  My design wall came in handy! 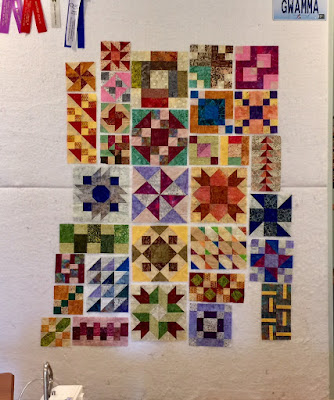 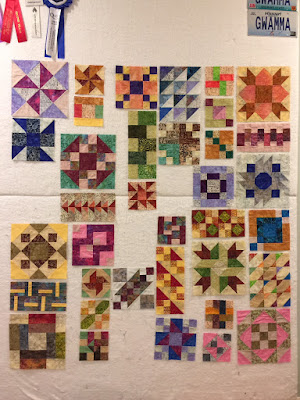 Since all forty blocks had to be used I chose to make my quilt reversible.  And since I need a quilt to keep in my car "just in case" I decided to make it a car quilt. 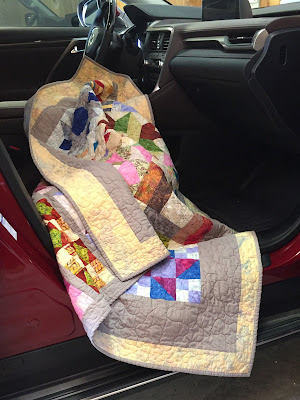 (Oh yeah, I forgot to mention that I also added some appliquéd circles.) This is the front ..... 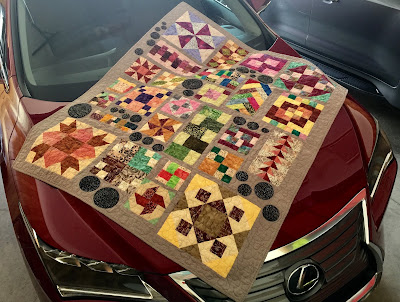 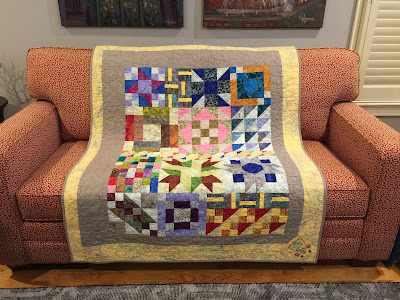 Denise did her own thing, too by using gray prints and putting her blocks together without any sashing.   It's gorgeous!   This is the photo taken at Patches and Stitches for their Facebook page. 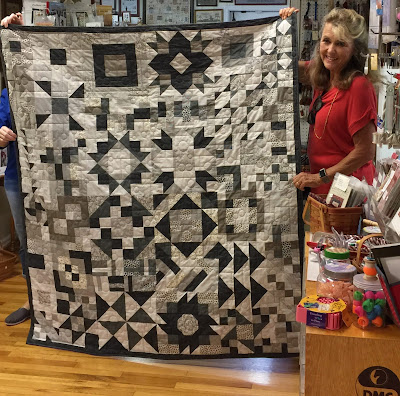 Because mine is reversible they had to take more than one of me! 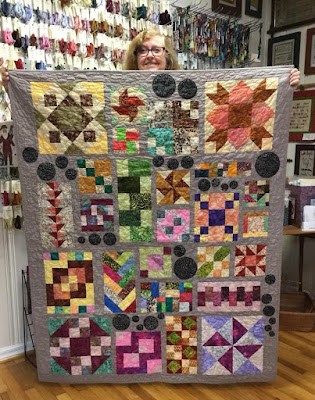 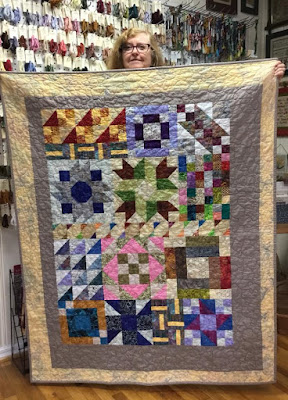 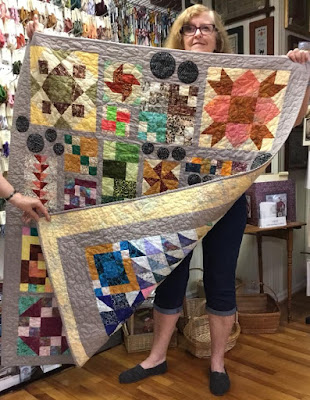 To commemorate our experience I had a special label custom made by, who else, Denise! 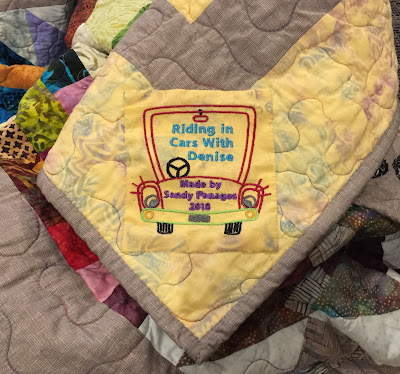 This was the first time I've participated in a Local Quilt Shop Block of the Month, or Row by Row, or Block by Block, and I'm so glad I did.  I really like my quilt.

Linking up with Confessions of a Fabric Addict
Posted by Sandy Panagos at 9:01 PM 4 comments:

I started making hexies a while back.  Not because I love hexies.  Just because I wanted to always have some handwork available when I needed something to do.  I even took them along to the beach in June and never touched them.  Maybe I liked having them along just in case.  Or maybe I didn't want to mess up that beautiful box, it was so pretty, and organized! 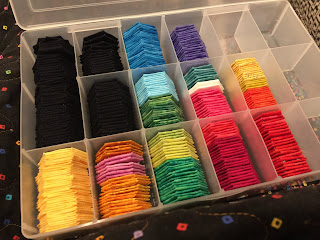 I don't really have any kind of plan for putting them together, I just know I want to do something different. (Surprised?) I've decided to go Improv, just playing with a layout, sewing them together, and seeing where it goes.  It started like this ..... 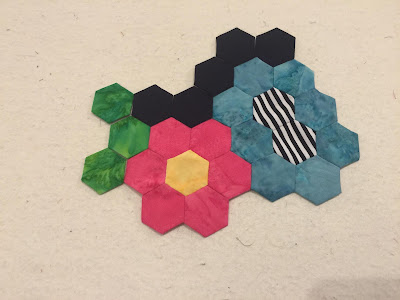 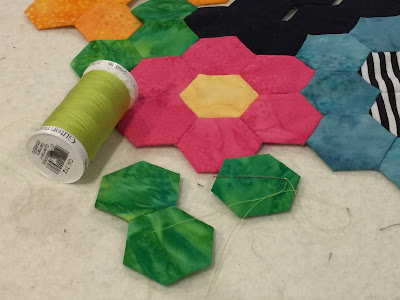 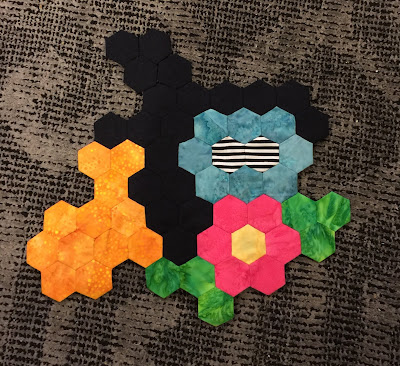